and Plan for Future Improvements

The last interstate operations analysis for the FM metropolitan area was completed in 2010-2011. Since that study began in 2010, the metropolitan statistical area (MSA) population has grown nearly 18 percent, from approximately 209,000 to over 246,000.  The 2020 MSA population exceeded the 2020 projections that were in use during the last study by approximately 5,000.  The 2035 population projections for the MSA, which were used as the basis for the 2011 Interstate Operations Study, were approximately 281,000, whereas the 2035 population projection developed in the Fargo-Moorhead 2016 Demographic Forecast ranged from 309,000 to 317,000. The 2045 projection is 330,000 to 342,000. These higher growth levels, combined with geographical expansion of urbanization are likely to yield significantly different recommendations than those of the 2011 study.

Both MnDOT and NDDOT anticipate reconstruction projects within the next decade, and wish to study the needs of the interstate in light of metropolitan area growth projections and freight usage. Both MnDOT and NDDOT will have significant roles as project partners. Local project partners involved in the project will include Cass and Clay Counties and the Cities of Fargo, Moorhead and West Fargo. Each city has the potential for future interchanges within their jurisdiction, as identified in Metro Grow.

Many of the recommendations of the 2011 study have been implemented or are in the process of being implemented. This study is intended to inform anticipated interstate highway reconstruction projects by looking at the interstate system as a whole, recognizing the collective impact that each interchange has on adjacent interchanges and on through traffic. The study will need to analyze the system based on future (2045) ADT and peak hour volumes, pinch points, weaving issues, potential collector-distributor opportunities, and potential need for, feasibility of, and system impacts of future interchanges. Metro COG is interested in determining how, where and when interstate highway congestion typically manifests and its average duration. One significant area of analysis is the I-94 bridge over the Red River. This bridge will need rehabilitation, and both NDDOT and MnDOT want a determination as to the future capacity needs of the bridge prior to investing significant funds in rehabilitation.

The boundaries of the study will include I-29 from 100th Avenue S to Argusville (Cass County 4), and I-94 from Cass County 15 (165th Ave SE interchange, also known as Exit 340 – Kindred) to MN 336/Clay County Highway 11. Future interchanges should be considered at the section-line arterial roadway alignments of 64th and 76th Avenues S in Fargo and 55th Street in Moorhead.  Previous efforts such as the 76th Avenue South Corridor Study, the Moorhead GAP/AUAR and the MTP can provide insight into the consideration for new interchanges in recent years.

The need for and potential benefit of a ring route around the perimeter of the metro area will also be studied as part of the interstate operations analysis, to determine the extent to which such a facility has the potential to serve as a reliever to regional interstate routes.   Ring route alternatives in Minnesota will include MN 336 and Clay County Highway 11. A ring route alignment in ND does not have a defined route, but past studies such as the Cass County Comprehensive and Transportation Plan (2018) and the alignment of the FM Diversion inform potential route alternatives. Metro Grow, the 2045 MTP (2019), called for additional study of a ring route in North Dakota and a similar facility on the Minnesota side, to provide an efficient alternative route around the metropolitan area for regional traffic as well as creating a more efficient route to make intra-regional trips than the grid arterial network in the FM region. The emphasis of the ring route analysis will be to determine the extent to which a ring route relieves traffic on portions of I-94 or I-29 and if that relief is adequate to prevent or delay the need for capacity expansions through 2045, and to determine if the impacts of a ring route are advantageous or disadvantageous compared to interstate improvements.

The interstate system is a barrier to active transportation in some portions of the metropolitan area. This study will need to identify locations where grade separated crossings are needed to facilitate bicycle and pedestrian modes of travel.

I-94 and I-29 are essential to the efficient movement of freight into, out of, and within the metropolitan area.  The needs of truck traffic and the future changes in the volume of truck traffic within and through the metro area will be an important component of the study.  The Regional Freight Plan (2017) may provide valuable information and insight.

Recommendations of the 2011 Interstate Operations Study included Transportation Demand Management (TDM) strategies that reduce peak demand on the Interstate System by five percent. These recommendations have not been accomplished and there is little appetite in the community to form a transportation management organization (TMO) for the metropolitan area in the foreseeable future.

Intelligent Transportation Systems (ITS)/Incident Management strategies that provide improved travel information and coordinated response to emergency situations were also recommended.  Features that have been implemented to date include:

Since the completion of the 2011 Interstate Operations Analysis, the following improvements have been made:

Since the completion of the 2011 Interstate Operations Analysis, the following improvements are still underway:

Median barriers (either high-tension cable or concrete) have been installed, or are programmed for installation throughout the metro area. These were not a recommendation of the 2011 study.

Ramp metering was recommended, but has not been implemented.

Starting in 2021, I-29 bridges and connecting portions of highway south of Fargo will be constructed in a manner that will accommodate the alignment of the FM Diversion. The design of this new segment of highway and bridges will include forms of technology that will be compatible with data collection and connected vehicles.

The 2018 Alternate Route & Traffic Incident Guidebook recommended the development of a regional traffic operations center/transportation management center (TOC/TMC), or the coordination of operations regionally between individual traffic and transportation management centers. This was also recommended in two prior ITS studies and incident management strategies for the region.  No action has been taken to move the metro area in this direction, with the exception of sharing information and video feeds between some jurisdictions and entities, including MATBUS, Red River Dispatch Center, ND Highway Patrol, and MN State Patrol.  NDDOT is currently seeking funding for a statewide TMC to monitor operations and manage emergency and/or maintenance responses to conditions. 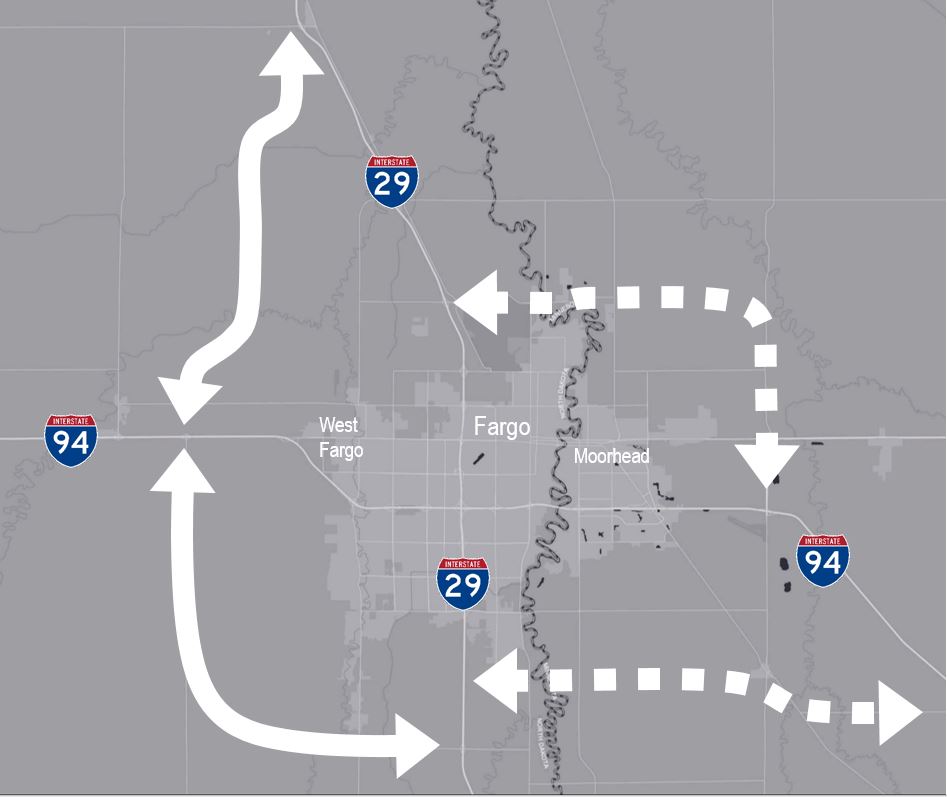