Metro COG, the City of Fargo, and NDDOT will study the University Drive and 10th Street one-way pair, from 19th Avenue N to 13th Avenue S, to identify opportunities to enhance neighborhood livability and economic conditions along these two corridors. In response to neighborhood input received by the City of Fargo during the development of the Core Neighborhoods Master Plan, these two corridors will be studied to identify roadway alternatives and livability characteristics that will address issues raised by the public. One alternative will likely include a study of the impacts, feasibility and desireablity of converting the one-way configurationof University Drive and 10th Street (US Hwy 81) to two-way streets between 19th Avenue N and 13th Avenue S. Other alternatives will be identified during the study process. Traffic forecasts and traffic operations analyses will be conducted to examine the extent to which the roadway sections can be used in their existing configurations and to identify roadway segments that would require partial or full reconstruction and widening. Impacts to intersecting and parallel roadways must be identified and analyzed as well as impacts to adjacent properties. Impacts to freight and delivery services shall be identified and analyzed. Impacts to transit routes, bicyclists and pedestrians will be identified and addressed as part of the study.

Complete streets components, including the advantages, disadvantages, and feasibility of on-street parking and aesthetic improvements shall be identified. Roadway components, traffic control modifications, and other improvements needed to make such a change will be identified. Planning level cost estimates will be provided. Stakeholder and public engagement will be conducted to determine the level of support for leaving the corridors the same, and for changing them to incorporate other configurations or components. A land use and economic analysis will be required to identify if and how changes to the configuration of these corridors could enhance the viability of existing areas of single family residential land use or improve upon the livability of the neighoborhoods along University and 10th Street. This analysis should expand upon public input received by the City of Fargo during the development of the Core Neighborhoods Master Plan.

Consultants should describe the extent to which microsimulation efforts could be employed in this study to facilitate the review of alternatives. Refined study alternatives (up to two) should be animated so that the general public can view 3-D walk-thru representations of the alternatives. The alternatives should reflect projected traffic Request for Proposals (RFP) University Drive & 10th Street Corridor Study 6 volumes and operations as well as elements usually included in typical corridor studies. A warrant analysis should be done for all existing signalized intersections as well as all proposed traffic control. 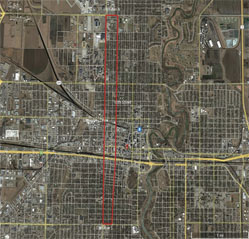